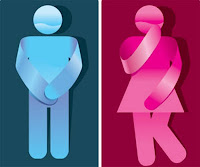 Jennifer Roback Morse recently discussed the “Gender Jumble” that would result from the California Student Civil Rights Act at the National Review Online. And I thought I try to address some of the concerns she expressed in her recent column, and offer some modest proposals.To begin with, here is some proposed new terminology to replace the outmoded, outdated things like “husband,” “wife,” “mother,” “father,” etc.:
(This terminology enables ease of transition once polygamy, uh, I mean plural marriage is legalized: “Gamma Rent,” “Delta Rent,” and so on for parental units. “Main Squeeze” can become just “Squeeze” in the case of multiples: “Mo Udall’s grand-rent had four squeezes.”)

A new pronoun will be introduced. It will replace the gendered third person pronouns: “he,” “she,” “him,” “her,” etc. It is based (loosely) on the pronoun developed in Ursula LeGuin’s “Left Hand of Darkness,” more so another sci-fi book that ripped her off in that regard (i.e., the gender neutral pronoun), and modeled on the existing English Language pronouns. It is: ke.

Usage: Here is an example of the new terminology in use:

“The first grade child’s Alpha Rent, Wiki-wiki, was unable to come to the Parent-Teacher conference as ke was at the hospital. Ky sibling had been brought to the hospital earlier in the day, so ke was waiting there to hear news of ky health. So, the child’s Beta Rent, Mellifluous, came to the school. Unlike the parents of the other children in the class, ky rents were still married, so Mellifluous was Wiki-wiki’s Main squeeze, and vice-versa. Or in other words, they were mutual main squeezes.”

Yes, it seems awkward and confusing now--one starts to loose sight of the antecedents in the sentence--but after the new pronoun takes hold, and teachers no longer have to worry about getting in trouble for being politically incorrect when it comes to “genderification,” well, I am sure it will just take off, and people will look back on the use of “he” and “she” the way they currently do about hit, he and heo of Anglo-Saxon.

(Besides which, no one pays that much attention to anyone else any more, so who cares about the antecedents? The average person’s attention span dictates simple declarative sentences and pretty much precludes the use of any pronouns other than the first and second person.)

Admittedly, this may be poquito confusing for Spanish speakers, so while it is worth considering another consonant to replace the letter “k” for clarification, it should be noted that careful thought was given to the letter “K.” In working through the alphabet, too many other choices had the potential to “genderfy” the pronoun: Using a hard or soft “G” sound would harken too much to the Greek root for woman, gyn- not to mention the word, “girl.” Using an “F” or “D” is too reminiscent of “father” or “dad,” as would the letter “P”—because of the reference to the Latin root, pater, not too mention the more crude, and readily identifiable by children, reference to “pee-pee,” which would render that pronunciation too “masculine.” “T” is similarly problematic on the other side of the gender fence, (“ta-tas” and “tits”), as is “V” (too close to “vagina” and “vulva.”)

Plus, the letter “K was used in the Ursula LeGuin rip-off book.

A committee would need to carefully review other possible consonant choices.

As for homecoming queens, well...

One person will be elected to serve as the Homecoming Dictatron. (Stealing from the restaurant industry who tried out “waitron” as an alternative to “waiter” or “waitress” before settling on the still-sexist “server.”) All students of any gender or gender-identity would be eligible for the title and the throne. That student can then appoint any number (because one would posit the idea that a ruling set consists of two people only, alienating those children from families that practice plural marriage) of Sheikstrons of Fun to co-rule with kerm over the Homecoming Festivities.

Hope this helps with envisioning the future!
Moxie D. Hoxie at 10:06 AM